on state money for portable AC units in schools

FILE – In this Oct. 20, 2014 file photo, Maryland Republican gubernatorial candidate Larry Hogan answers questions during an interview with The Associated Press in Baltimore. Gov.-elect Hogan says he remains committed to pursuing tax relief in his first year as governor, despite a projected budget shortfall of more than a half a billion dollars. Hogan said Monday in an interview with The Associated Press that he would consider calling a special session next year to do more work on the state’s finances, if that’s necessary. (AP Photo/Patrick Semansky, File) 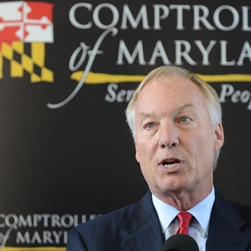 The General Assembly also put an end to the annual “beg-a-thon,” in which local school superintendents appear before the Board of Public Works to ask for more construction money.

Hogan said the provisions were major reasons he decided not to sign the capital budget bill, where lawmakers made both changes. The bill will become law without his signature.

“It’s one of the most absurd and ridiculous things I’ve ever seen the legislature do,” Hogan said.

The provisions were adopted by a House-Senate conference committee that met last week to resolve differences between the two chambers’ versions of the state’s annual budget for construction projects.
Board of Public Works OKs use of state money for portable air conditioners

Franchot complained that neither measure was aired in hearings during the legislature’s 90-day session and weren’t in earlier versions of the bill. He suggested that the move was made secretly and was a shot at him and Hogan.

“I think it’s a bizarre use of the conference committee,” Franchot said. “I don’t know who put that language in. Nobody’s raised their hand and said, ‘I did it.'”

We’re going to hold the education administrators accountable for their decisions, particularly when they are receiving hundreds of millions in taxpayer dollars from the State of Maryland.

“It’s nothing political. We’re looking at being the best stewards of public money,” Jones said.

Jones rejected any suggestion that the decision was made in secret. “These are open meetings. … Doors are open, anyone can come,” said Jones, who led the House negotiators.

While conference committee meetings are open to the public, it can be difficult to determine when and where they will be held. Neither Jones nor Sen. James E. “Ed” DeGrange Sr., her Senate counterpart, knew where the language they adopted originated.

For several years, Franchot has pressed local school systems — particularly those in Baltimore city and county — to speed the installation of air conditioning in public school classrooms.

Hogan has joined the comptroller in pushing for the installation of portable window units as a quicker solution.

But the school systems in the city and county have preferred to spend their money on central air conditioning.

While that takes more time and money to install, school officials contend it is a better use of taxpayers’ dollars in the long term.

Franchot said the legislature’s action does a disservice to Maryland families.

“What about the 40,000 children in Baltimore City and Baltimore County who sit in sweltering hotboxes without air conditioning?” he said.

The Board of Public Works did not require money be spent on portable air conditioners but voted in January to scrap a policy that prevented state money from being spent on portable units in classrooms. The legislature’s budget provision undoes that action.

Baltimore County did not plan to use state money for portable air-conditioning units, even after the policy was changed, said Ellen Kobler, a spokeswoman for County ExecutiveKevin Kamenetz.

At the beginning of the school year, 48 schools in Baltimore County did not have air conditioning.

Baltimore City school officials did not respond to a request for comment. The city school system has been studying the feasibility of installing portable air conditioners, which officials have estimated would cost about $17 million.

DeGrange, an Anne Arundel County Democrat, noted that jurisdictions are free to use their own money to buy window units if they choose — as his county has done.

Franchot and Hogan also objected to a provision that says local school officials can’t appeal decisions from the Interagency Committee on School Construction to the Board of Public Works on how to allocate state construction money.

The appeal process has been dubbed the “beg-a-thon” because it usually involves a full day in January when local school superintendents and other officials go before the three board members to implore them to fund their projects.

“Our experience has been that the members of the BPW often do not question the construction projects but use the time as a forum to advance political agendas such as financial literacy, declining enrollment, communications to parents, post-Labor Day starts, charter school approvals, and other instructional or operational issues,” the letter said.

The superintendents specifically excluded Treasurer Nancy K. Kopp — but not Franchot or Hogan — from their criticism. Kopp, they said, asks “appropriate questions.”

Franchot said the superintendents object to the “transparency and accountability” of the process. He said members would still be able to quiz superintendents when they appear before the board on other school-related items.

DeGrange said the beg-a-thon was an “outdated” event. “It was just a ridiculous process,” he said. 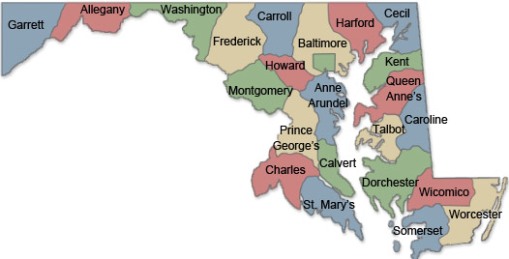 We appreciate the proposal by the County Executive Baker to take charge of the Prince George’s County Public Schools (PGCPS) school District.  Most of the opposition to a drastic change of direction for the school system is motivated by person’s own political/financial welfare; people’s opposition is based on some current power/position they currently have. For example Board of Education statement led by Ms. Verjeana Jacobs was not sincere given what they have done in the last eight (8) years.  (See the statement here)   In any event, a lot of people don’t have the children of this country’s best interest at heart.

How could anybody say that they are happy with being the toilet bowl of education in the whole state of Maryland?

Something needs to change!! This is not a money problem. The problems that we face are derivative of lack of vision, leadership, and direction. With the revolving superintendents and the high school-educated community activist school board, the schools do not have a chance. Proof is in the pudding!  The Washington post was right on their article (Read it here). This article calls Baker’s tactics ruthless and cold blooded.  Maybe So!  But guess what!  That unwillingness to compromise and/or tolerate the school system’s inadequacies is needed!  We think it’s ruthless and cold blooded how the school system is educating the children in PG County!! We support the change wholeheartedly; anything has to be better than the status quo.

The Only thing we could ask the State legislature to do is to press Mr.Baker to keep his promise and to hire an independent Inspector General as part of the amendment.  (See HB1107 Amendments  here).  2014 Election year is fast approaching and we will waive our right to select the officials that determine the fate of our school system if we do not act fast.  Elections themselves, like we have always said in our tweeter feeds, (are) not a wedding reception where everybody is happy and singing. Elections are emotive, and mobilization for support, as we have seen last year, has emphasized on candidate’s record and promises made plus the delivery. The Inspector General would ensure that there will be somebody to keep the county Executive now and in the future plus  his superintendent honest or accountable. If Mr. Baker is not up to the task, we request him to pass the torch to the State of Maryland and Governor O’Malley to take over the struggling school system. In addition, you can also call your elected officials in Annapolis – Maryland and request the same. Previous County Executive Mr. Jack Johnson and his wife Leslie Johnson went to jail last year because of the lack of accountability and corruption related matters. We do not want Mr. Baker to expose us and/or our community to the same calamity.  We are sure the Feds will be happy to see that the County can do better on their own than to keep revisiting the same situations. It’s time!