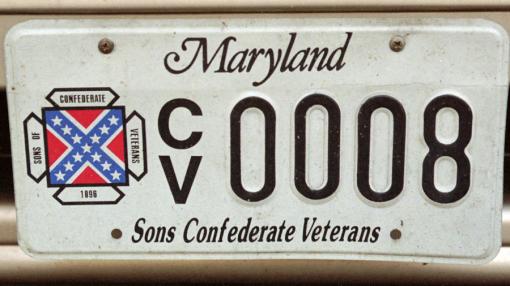 The Maryland version of a proposed license plate honoring the Sons of Confederate Veterans is displayed during a public hearing in Richmond, Va., on Jan. 21, 1999. (Steve Helber/AP)

Maryland efforts to eliminate symbols that many people perceive as racist gained momentum Tuesday, with Gov. Larry Hogan (R) signaling plans to end the use of the Confederate battle flag on vehicle tags and a progressive group starting a petition to take down other reminders of past inequality.

“Governor Hogan is against the use of the Confederate flag on Maryland license plates,” spokesman Doug Mayer said in a statement. “We are working with the [Maryland Vehicle Administration] and the Attorney General to address this issue as soon as possible.”

The announcement came hours after MoveOn.org launched a petition calling on Maryland leaders to remove what organizers described as symbols of racial inequality from the state capitol and the University of Maryland.

It followed a decision by Virginia Gov. Terry McAuliffe (D) to phase out a state-sponsored license plate featuring an image of the Confederate flag, and an announcement by mega-retailers Amazon.com and Wal-Mart to stop selling Confederate-themed items.

Opposition to the flag and related objects has increased nationwide since last week’s mass shooting at a historic African American church in Charleston, S.C. Authorities say the suspect, 21-year-old high school dropout Dylann Roof, declared his hatred for African Americans before opening fire. The Justice Department is investigating the shooting as a hate crime.

The MoveOn.org petition is demanding the removal of a statue outside the Annapolis statehouse honoring Chief Justice Roger Brooke Taney, who wrote the majority opinion in the Supreme Court’s 1857 Dred Scott decision that said blacks born in the United States could not be U.S. citizens.

The petition also calls for U-Md. to rename its football stadium, which bears the moniker of former university president Harry Clifton “Curley” Byrd, a segregationist. It says Byrd was responsible for the race-based rejection of Thurgood Marshall, who became the Supreme Court’s first African American justice, from the U-Md. law school.

“Structures erected in honor of Roger Taney and Curley Byrd are symbols of racial hatred with no place in our government,” the petition says, “and . . . it’s time to put these symbols behind us, accelerate our healing, and have Maryland embrace unity and respect for human rights rather than division and white supremacy.”

The petition had more than 275 signatures on Tuesday night.

MoveOn.org added a second petition late Tuesday calling for Capital One bank, soda maker Pepsi and the Under Armour apparel company to cut financial ties to U-Md. until the school decides to rename Byrd Stadium.

“When opening up a bank account, buying athletic apparel, or choosing a soda, people do not want to feel like they are helping a company to further finance institutional racism, so join us in this steadfast and unwavering demand: Say bye-bye to Curley, and do it in a hurry,” the petition said.

Colin Byrd, an African American U-Md. graduate who created the petitions, led an earlier campaign to convince the school to rename Byrd Stadium. The student government endorsed the proposal in a 13-to-2-to-2 vote in April, and university president Wallace Loh sent the matter to the school’s naming committee for review.

U-Md. spokesman Brian Ullman said Wednesday that the committee, which includes faculty, staff and student representatives, has not yet met. He added that “ultimate authority for the naming of all campus buildings rests with the University System of Maryland Board of Regents.”

Both Maryland and Virginia had been under court order to permit images of the Confederate flag on their license plates. But that changed last week, after the Supreme Court ruled that Texas could reject a license-plate design requested by the Sons of Confederate Veterans. The decision does not force states to change their policies on specialty tags, but it allows them to reinstate prior restrictions on Confederate symbols that were overturned.

In addition to the statement by Hogan’s spokesman Tuesday, some 30 state lawmakers sent a letter to Maryland Transportation Secretary Pete K. Rahn and Milton Chaffee, head of the state Motor Vehicle Administration, asking them to discontinue Confederate-themed license plates.

Maryland House Speaker Michael E. Busch (D-Anne Arundel) did not sign the letter but supports banning the Confederate flag from the state’s license plates, Busch spokeswoman Alexandra Hughes said. Hughes said the speaker could not be reached for comment about the petition.

Maryland Senate President Thomas V. Mike Miller (D-Calvert) could not be reached for comment on Tuesday.