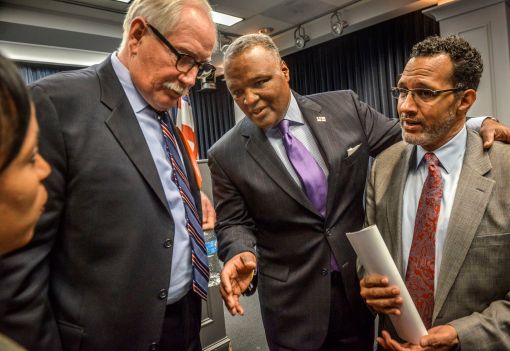 Prosecutors have moved to dismiss an assault case against a school board chairman in Prince George’s County who was accused of pushing and threatening a fellow board member after a contentious meeting in July.

The decision this week appears to end an unsettling episode, where board chairman Segun C. Eubanks faces a second-degree assault charge. Online records have shown a trial date in October.

“The matter will be dismissed based on our screening of the case because of insufficient evidence,” said Ramon Korionoff, spokesman for the state’s attorney’s office in Montgomery County, which was handling the matter for its neighboring suburb.

The assault charge was filed by school board member Edward Burroughs III, who alleged that Eubanks shoved him against a bookcase — in a room outside of public view — and yelled, “I will f— you up” several times while pointing a finger in his face.

The incident followed a heated board discussion about a payout of nearly $800,000 to the school system’s outgoing chief executive, Kevin M. Maxwell, who was stepping down from the role amid a string of scandals, as well as a call for Eubanks’s resignation.

Eubanks, chairman of the board since 2013, was appointed by County Executive Rushern L. Baker III (D) after Baker persuaded state lawmakers to give him greater control of the low-performing system. Burroughs is an elected member, in his 10th year of service, and part of a vocal board minority bloc.

In a statement Wednesday night, Eubanks said he was pleased but not surprised by the result and called the allegations false and reckless, asserting that prosecutors found them “baseless and without merit.”

Eubanks said he was “evaluating options to seek redress and reparations for this wholly unnecessary ordeal.”

“Now that these irresponsible allegations have been put to rest, it is my hope that all board members can put other agendas aside and join me in focusing on serving the school children of Prince George’s County,” Eubanks said.

Bruce Marcus, an attorney for Eubanks, echoed many of the same points, saying it was regrettable that “irresponsible and undisciplined individuals would attempt to manipulate our judicial system in order to promote their own interests.”

But Burroughs stood by his account of the incident, providing a written statement penned by a witness in the room. Burroughs said he was told Tuesday by the Montgomery County official screening his case that she did not have a working phone number for that person — and had not talked to the person.

“It really is disappointing to think that something like that could occur and there not be any consequences,” Burroughs said. “It’s like middle school bullying.

[Restraining order remains in place against school board chairman in Maryland]

Burroughs said most people in the room that night were members of the board majority and that one person in the room called him the next day to say the board members would not back up his allegations.

“I proceeded anyway,” he said. “But I knew the reality.”

Prosecutors had no comment on details of their decision-making, Korionoff said.

Following the July 12 incident, Burroughs also filed for a temporary restraining order against Eubanks. But he dropped it after a phone call that included Eubanks and lawyers for both sides. Burroughs said at the time a resolution had been reached and his fear of being attacked for disagreeing with Eubanks was alleviated.

But he did not withdraw his assault complaint.

How the episode may affect the school board is an open question. Both Eubanks and Burroughs said they do not expect problems. The school board was scheduled to meet Thursday night.

“We are professionals, and I look forward to a productive meeting tonight and moving forward,” Eubanks said. 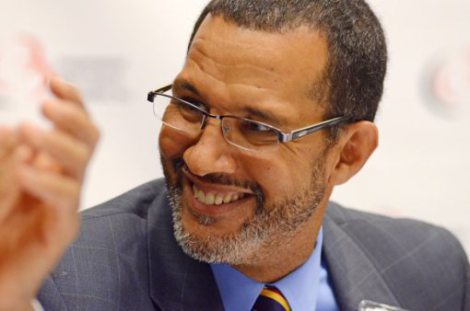 After assaulting Mr. Edward Burroughs in a widely circulated reports, Mr.  Eubanks has now said that, he was “evaluating options to seek redress and reparations for this wholly unnecessary ordeal.”