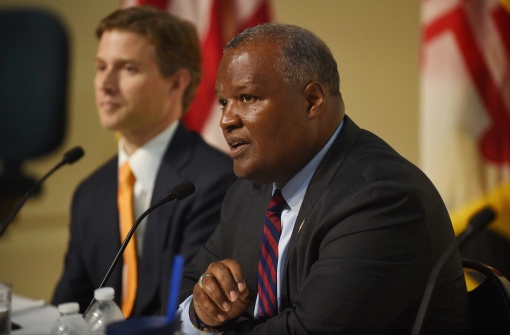 Rushern Baker is one of eight Democratic candidates in the race for Maryland governor. (Astrid Riecken/For The Washington Post)

Theresa Dudley, president of the Prince George’s County Education Association, said the protest on Friday afternoon was in response to an ongoing wage dispute with county leadership.

“We weren’t going to listen to his garbage,” Dudley said, adding that the group voted Friday morning to take the action.

Andrew Mallinoff, Baker’s campaign manager, said the county executive respects the teachers’ union right to protest but he “is not their enemy.”

The disruption came as Betty Weller, president of MSEA, introduced Baker to address the crowd. Baker and the seven other Democratic candidates for Maryland governor, who are seeking the MSEA’s endorsement, were given an opportunity during the two-day convention to answer questions from members of the union.

“What a way to start off,” said Baker, who has received high marks in recent polls looking at the 2018 gubernatorial race. Weller quickly turned back to the program without acknowledging the disruption.

Dudley said members of the local union are upset that Baker has not provided back pay increases to them like, she said, he promised.

She alleged that Baker told the union in 2012 that if it supported the county’s plan to bring the MGM Casino to National Harbor, he would ensure that teachers who were behind on their pay increases would receive the money.

“You have to make people whole,” she said.

Mallinoff declined to respond specifically to the charges by Dudley, describing it as “ local politics. It doesn’t reflect Baker’s commitment to education.” He said Baker has called for raising “the bar on education and pushing people to rise to a new level. Whenever you do that there is going to be tension.

Friday’s protest is not the first time Baker has been at odds with the county teachers union.

The union vehemently opposed Baker’s plan in 2013 to take over the school system by appointing a new superintendent to his Cabinet and assuming authority over the school system’s budget. The state legislature approved a watered-down version of Baker’s proposal, giving the county executive power to appoint the superintendent, now known as the chief executive officer, to select the board chairman and vice chairman and appoint several members to the school board.