UPPER MARLBORO — One year after the Prince George’s County Board of Education voted to postpone school boundary changes, new proposed changes are before the governmental body.

Boundaries are historically a tough topic in the school system and the proposals, made by the Chief Executive Officer Kevin Maxwell on Jan. 19, were no exception, as parents, community members and board of education members raised questions about the proposals.

However, unlike previous years, the school system’s capital improvements office made a large effort to give communities the opportunity to take part in the boundary decisions, said Johndel Jones-Brown, the director of Pupil Accounting and School Boundaries in Prince George’s County Public Schools (PGCPS).

“One of the things that we allowed for in those community discussions was the opportunity to follow up,” Jones-Brown said. “Again, understanding the complexity of some of these issues and realizing that there were no easy, readily available solutions.”

Pupil Accounting and School Boundaries partnered with the capital improvements office for the onsite meetings with the affected communities. Together, the two offices gathered information at a meeting at Bladensburg High School that addressed several northern and mid-county boundary issues; a meeting at James Madison Middle that looked at a number of relocation options for a regional school and boundary issues surrounding the middle school; and at Accokeek Academy where the community talked about overcrowding at the Talented and Gifted (TAG) designated school.

After months of gathering information from the community, Jones-Brown and Maxwell took the data and compiled the CEO’s recommendations for changes for the next school year.

One of the first proposals discussed was a solution for the overcrowding at Accokeek Academy, which is supposed to house a K-8 cohort and is also a TAG designated school.

The boundary changes for the academy were a hot-button issue in 2016, and one of the reasons the board voted to postpone changes was the overwhelming push-back from the community.

This year, the community turned out in numbers to be a part of the decision-making process, but both Sonya Williams, the board member who represents the area, and Tommi Makila, an activist and parent of a student at the school, noted that Maxwell’s proposal did not reflect what the community thought was a consensus.

“It seemed that we found a consensus approach that everyone could live with,” Makila said. “Considering the hard work that was put into this, I was very surprised and disappointed that the CEO is proposing to move forward with (another option.)”

The proposal brought before the council looked at several factors. Currently Accokeek Academy does not function as a true academy, as it pulls in new students during middle school years, due in part to the current boundaries.

The school is also at 99 percent of its state rated capacity, while nearby Fort Washington Forest Elementary (FWF) is only at 66 percent. The set target for PGCPS is 80-95 percent utilization.

To solve a number of concerns for the area, Maxwell’s proposal includes reassigning “The Preserves” and homes off Danville and Floral Park Road to FWF and Gwynn Park Middle, which was not the communities’ first choice.

The option most preferred by the community was moving the TAG center to FWF and a nearby middle school, or to establish a two-campus academy between FWF and Potomac Landing Elementary.

Jones-Brown, however, said both of those solutions would take more resources and disrupt more students to accomplish. In addition, the two-campus academy would function as a K-3 at one school and a 4-8 at the other due to capacity restrictions.

In response, Williams suggested a phase-in approach with the TAG center relocation that would move the TAG classes from the academy as the next grade was phased in.

At the same time, Boardmember Edward Burroughs, III questioned why anything had to be done to address the overcrowding at Accokeek Academy. Eleanor Roosevelt High School has a similar overcrowding issue due to the school’s program popularity. He said he hasn’t seen any effort to address that similar issue and said he felt it was equitable to only change one.

“When I look at this holistically as a South County issues, I look at schools like Roosevelt in the northern part of the county that are significantly overcrowded, but we don’t touch their boundaries at all because their program is a success. But in the southern part of the county, Accokeek Academy is a success and we’re tampering with the boundaries,” Burroughs said. 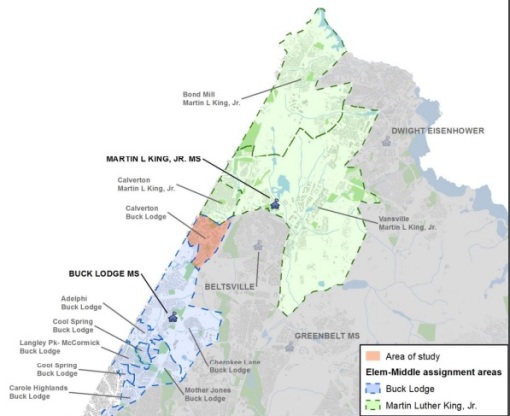 In another change, the CEO also looks to a minor adjustment in North County that would be an interim solution to severe overcrowding at Buck Lodge Middle School until new middle schools are built in the area. Those buildings could take several years to come to fruition.

The proposal would move students in the Calverton Elementary area from Buck Lodge to Martin Luther King, Jr. Middle. The proposal would put both schools over capacity, as the move would more than fill the 202 currently open seats at MLK Jr., but would take some of the strain off Buck Lodge, which cannot accommodate any more temporary classrooms.

Thomas Stone is over-enrolled by approximately 157 students, while Mount Rainier has 98 available seats. 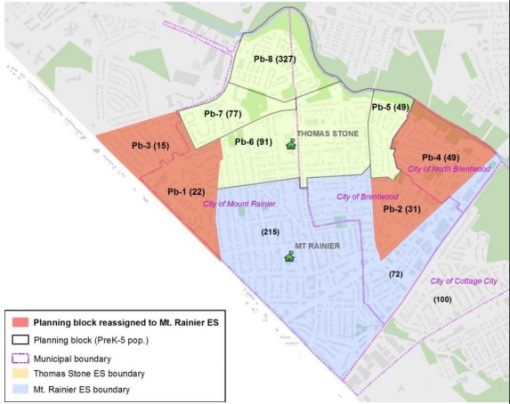 All of the proposed changed zones would still be within the “walking zone” of the school and no additional transportation would be provided by PGCPS.

In another minor change, the CEO proposed reassigning the Kentland neighborhood from DuVal High School to Fairmont Heights High School whose new building will open for the next school year.

The neighborhood is currently within the walk zone for Fairmont Heights, while it is approximately seven miles away from DuVal. Sixty-five school-age students currently live in that zone.

Students from the Margaret Brent Regional School could also be relocated to Fairmont Heights, which has brought concerns from special education advocates and families.

“Preparations for the transfer from Margaret Brent, the transfer of staff, were areas that were expressed as concerns,” Jones-Brown said.

As of now, these boundary changes are just proposals and the board will vote on them at their Feb. 23 meeting. There are two public hearings on the changes expected within the coming weeks, at Bladensburg High and at the Sasscer Administration Building.

PGCPS has not announced the dates or times.