Building a good team is key to the success of any enterprise. Jesus chose twelve unique individuals to build His world-changing enterprise. He intentionally chose several who had similar backgrounds—Peter, James, and John were fisherman. Matthew and Simon the Zealot came from opposing political views. Matthew came from an industry considered corrupt—he was a tax collector. It is clear Jesus chose those who had a skill set first, then changed the character of the individual. He mentored each one.

A good team needs to have team members with different viewpoints as well as those who are specialists in a particular area. It is noteworthy that Jesus chose someone expertise in handling money. Taking a team of twelve around the country required money and the ability to manage it. I’m sure Jesus spent a great deal of time with Matthew mentoring him on the proper use of money. He had to reshape his thinking about money.

Once the team was formed Jesus spent time molding His team into a cohesive unit to operate in unity. He corrected them when correction was needed. He taught them what it meant to love one another. He washed their feet. He taught and modeled servant leadership. Before you put a team together sit down and make a list of the skills you want represented on your team. Then recruit and invest spiritually into your team. Who knows, your team might just change the world, too!

When the world is full of uncertainty, what a powerful reminder that we don’t have to be perfect, we don’t always have to understand, we aren’t always even going to see eye to eye with those we serve with, and that’s o.k. because in the end the point isn’t perfect harmony, it is sharing the perfect peace and promise from the one who truly holds our HOPE.

“…you will be my witnesses in Jerusalem, and in all Judea and Samaria, and to the ends of the earth” (Acts 1:8). 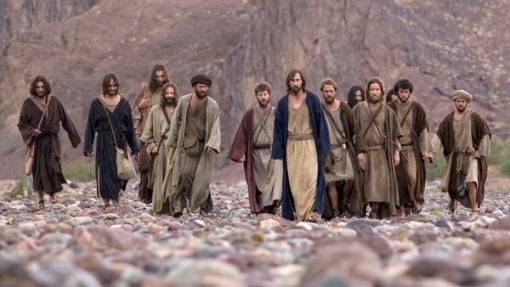 Jesus and the twelve disciples

‘Don’t put your confidence in powerful people; there is no help for you there.’

PRAYER: Lord, we place our confidence and trust in You and You alone. Help us to be like David, who trusted in You alone and destroyed the giant in the process. Amen.

Have an empowered rest of the week.

“For God so loved the World that he gave his only Son, that whoever believes in him should not perish but have eternal life.” ~ Jesus Christ