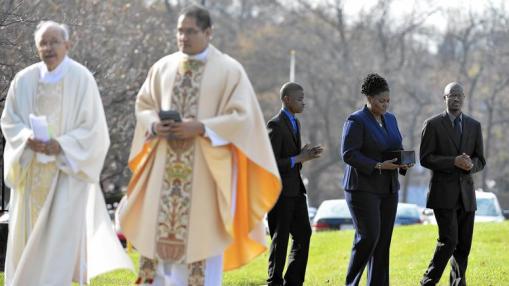 Dr. Martin Salia didn’t get into the medical profession to get rich, and even though he was a permanent U.S. resident, he chose to work in his native Sierra Leone because the need for surgeons there was so great.

Although his medical colleagues were worried when he returned there to treat Ebola patients, they said the decision was consistent with his character.

The 44-year-old surgeon was remembered Saturday at his funeral Mass as a tireless, selfless and heroic advocate for medical care for the less fortunate. Salia died of Ebola on Nov. 17 after being flown to a hospital in Omaha, Nebraska, in the advanced stages of the deadly virus. He became the second person to die in the United States after contracting Ebola in West Africa, where it has killed more than 5,000 people.

“The greatest heroes are people who choose to face danger, who voluntarily put themselves at risk to help others,” Klain said. “Martin Salia was such a man.”

The 90-minute Mass at the home parish of Salia’s family in Maryland drew a crowd that swelled to the hundreds. Relatives, friends, colleagues and dignitaries from both the U.S. and Sierra Leone were in attendance, along with Sierra Leonean immigrants from around the country, some of whom said they didn’t know Salia personally.

Salia’s wife, Isatu Salia, wept as she carried a small black box containing her husband’s cremated remains into the church, flanked by the couple’s sons, 20-year-old Maada and 14-year-old Hinwaii.

Stevens called for the United States to do more to “ensure that this scourge is blighted” in Sierra Leone and the other West African nations stricken by Ebola. Klain pledged that more aid was on the way.

“The world’s response has been too late, but now, help is coming,” he said to applause.

FILE – In this April 2014, file photo, provided by the United Methodist News Service, Dr. Martin Salia poses for a photo at the United Methodist Church’s Kissy Hospital outside Freetown, Sierra Leone. Salia, who died of Ebola after treating patients in his native Sierra Leone, will be remembered in the suburbs of Washington, where his family lives. Forty-four-year-old Salia died earlier this month at the University of Nebraska Medical Center in Omaha. His body was cremated. A funeral Mass will be held Saturday, Nov. 29, 2014.