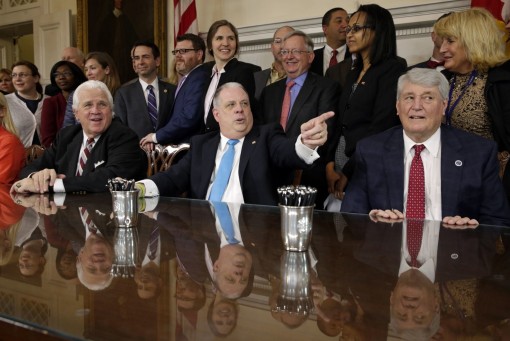 A debate over whether Baltimore-area schools can spend money on portable air-conditioning units has mushroomed into a power struggle involving some of Maryland’s top elected officials.

The Board of Public Works, which oversees state funds for school construction, voted 2-1 Wednesday to withhold $15 million in capital funds for schools in Baltimore city and county until those jurisdictions produce plans to use window-box air-conditioning units as a short-term fix to address a lack of cooling systems in their schools.

In a separate 2-1 decision, the panel voted to finalize a rule change that would allow school districts to buy portable air conditioners despite a state policy that prevents the use of state or federal money for such purchases, in part because of energy-efficiency concerns.

Franchot called the legislation a “highly charged, highly irregular, highly unusual intervention by the most powerful politicians — other than the governor — in the state.”

Busch pushed back Wednesday, saying it is the state legislature’s job to set policy.

“The Board of Public Works’ job is to do procurement, so I think it’s clear that policy initiatives come from the General Assembly,” he said.

Attorneys for the Board of Public Works and the legislature have traded letters arguing their positions on which body has the final say in the matter.

Hogan and Franchot described the stifling heat in Baltimore city and county schools — the only jurisdictions in the state that have a significant number of classrooms that lack air conditioning — as an issue that could affect students’ health and ability to concentrate.

Kopp accused Hogan and Franchot of using “fear and demagoguery” to affect local decisions. “It may be good theater, but it’s a very bad mistake,” she said.

He insists that the money would be better-spent on a plan he laid out for adding central air conditioning to all of the jurisdiction’s schools by the end of 2019.

The U.S. high school graduation rate reached a new high of 81 percent for the 2012–2013 school year, according to data released Thursday by the Department of Education.

Since 2010, states have been calculating their four-year high school graduation rates using a uniform measure, so that accurate comparisons can be made between different parts of the country. Eighty-one percent is the highest high school graduation rate the United States has seen since states began using this measure, a Thursday statement from the Education Department said.

“America’s students have achieved another record-setting milestone,” said Secretary of Education Arne Duncan in the statement. “We can take pride as a nation in knowing that we’re seeing promising gains, including for students of color. This is a vital step toward readiness for success in college and careers for every student in this country.”

The data show how graduation rates varied from state to state. As illustrated by the map below, Iowa had the highest graduation rate — 90 percent — while District of Columbia had the lowest rate at 62 percent. 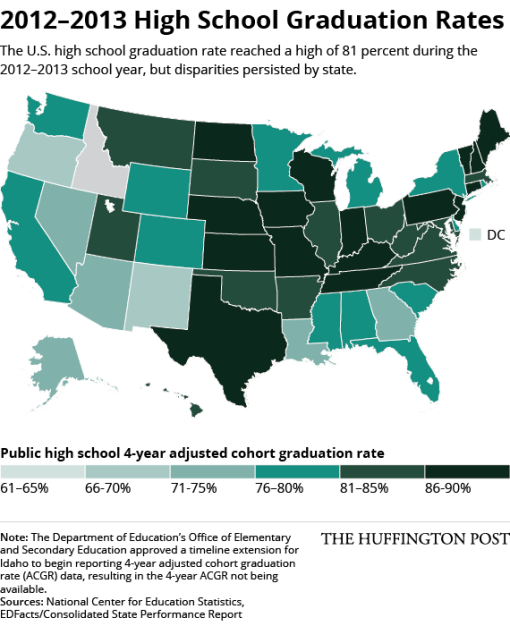 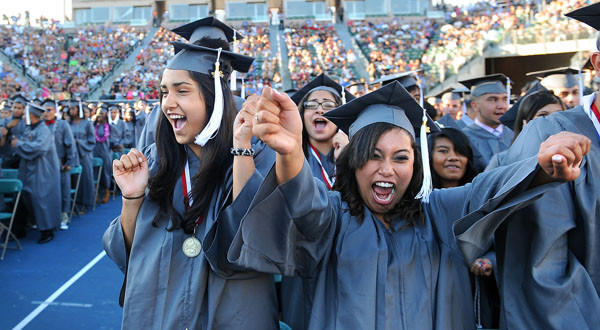 The Obama administration unveiled a proposal Thursday to regulate how the country prepares teachers, saying that too many new K-12 educators are not ready for the classroom and that training programs must improve.

Under the plan, the federal government would require states to issue report cards for teacher preparation programs within their borders, including those at public universities and private colleges, as well as alternative programs such as those run by school districts and nonprofits such as Teach for America.

The rating systems, which would need approval by the Education Department, would for the first time consider how teacher candidates perform after graduation: whether they land jobs in their subject field, how long they stay and how their students perform on standardized tests and other measures of academic achievement.

“Nothing in school matters as much as the quality of teaching our students receive,” Education Secretary Arne Duncan told reporters Thursday. “We owe it to our children to give them the best-prepared teachers possible.”

It will be years before any changes take effect. The administration will take public comments for 60 days, and it plans to issue new regulations by September 2015. But states would not be required to issue report cards for teacher programs until April 2019, well into the next administration.

Arthur Levine, former president of Teachers College at Columbia University and a critic of teacher preparation programs, said the country needs urgent action. “Our colleges and universities have waited far too long to transform these programs to meet the needs of both today and tomorrow,” he said