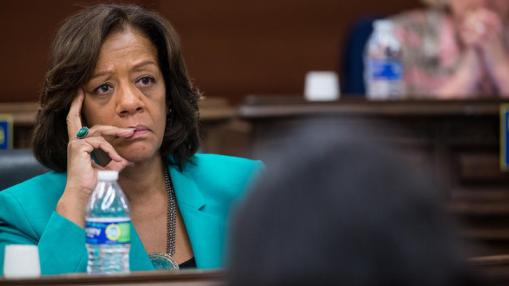 Chicago Public Schools CEO Barbara Byrd-Bennett, shown at a Chicago Board of Education meeting May 28, 2014, worked for the SUPES Academy before being hired at CPS. (Zbigniew Bzdak, Chicago Tribune)

Acting Chicago schools boss Jesse Ruiz announced Wednesday that the district was suspending payment on a $20.5 million no-bid contract at the center of a federal criminal probe, but he also defended his own vote for the 2013 deal in his role as vice president of the Chicago Board of Education.

Speaking at the first board meeting since news of the investigation broke last week, both Ruiz and board President David Vitale sought to calm concerns over their support of the controversial contract with an executive-training company tied to schools CEO Barbara Byrd-Bennett. She took a leave of absence Monday amid the federal probe, and Ruiz was chosen to become acting CEO.