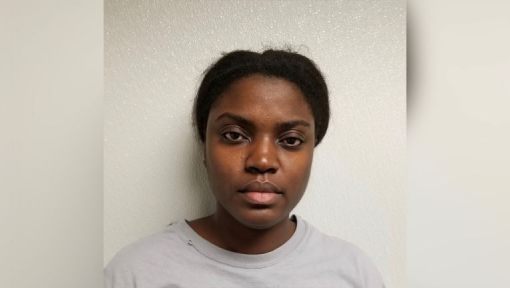 36-year-old Vivian Noirie faces child abuse and assault charges after a recorded fight with a student at Largo High School.

36-year-old Vivian Noirie of Clinton will appear in court next month. Police say they are also pursuing juvenile charges against the 17-year-old student.

The fight happened around 10:25 a.m. Friday at the school. Police say the student confronted Noirie after the teacher called her parents the night before.

Cellphone video shows Noirie punch the student after she steps on her foot and bumps into her in the classroom. Other high school staff then step in to separate the two.

Police say the student grabbed Noirie from behind and repeatedly struck her after they were separated. Officers declined to comment further.

The school’s website identifies Noirie as a Spanish teacher.

This is a developing story. Check back later for updates.

In the meantime, ever since Dr. Monica Goldson was appointed CEO, there is widespread interference of Federal and State laws to suit her illegal agenda. The unions Executives currently in Prince George’s County Public Schools (PGCPS) starting with Prince George’s County Education Association (PGCEA), Association of Supervisory and Administrative School Personnel (ASASP) and ACE-AFSCME Local 2250 have been compromised. This interference might be having an impact on teachers, students and other staff.

In other words, the role of the Unions in Prince George’s County has becomes meaningless due to personal greed as reported earlier. It’s a timely reminder that in Monica Goldson’s vision, public service is an amorphous concept. What matters, from the CEO’s perspective, is service to her. Loyalty to the county, state, nation and the rule of law are nice ideas, but CEO Monica Goldson expects and demands fealty to her and her interests – above all other considerations. The entire school district is a very hostile environment due to all cover ups going on.

In the current set up, Monica Goldson who has past ties to PGCEA and ASASP unions has made the Unions an extension arm of her office as an Executive which is unfair to the workers but that is another story for another day. It’s time to say No to the despots. #DespotsMustFall.