Annapolis, Md. (Reform Sasscer) – As United States citizens, We must demand more from our lawmakers and a chance for uncorrupted democracy.  It appears the local court system in Maryland is used as a tool for certain politicians and their friends to punish their opponents and those who may disagree with them.

In Maryland, laws are being applied selectively and different based on circumstances to hurt innocent citizens in a wide ranging scheme. Let us demand an end to this practice and more from our lawmakers. When addressing social inequalities, we must remember that bad decisions made by corrupt officials have an affect many citizens. The decisions made by these officials are to benefit the few elected individuals in the communities that they exploit at our expense. A very good example is the role Dr. Charlene Dukes played in Maryland and then Retired Amid Corruption Allegations And Self Dealings. These sort of self dealings and corruption allegations are widespread in Maryland than many people want to believe.

Maryland citizens and especially Prince George’s county citizenry must sort out the root causes of our state and county problems by defeating the despots, conmen and their organized cabals, then transform the counties and build a just and democratic society based on the rule of law instead of constantly begging some of our corrupt leaders to do something about it.

As Maryland matters highlights below, a group of powerful lawmakers — including the speaker of the House have become aware of some of these shenanigans and are beginning to review the issues. Viva! 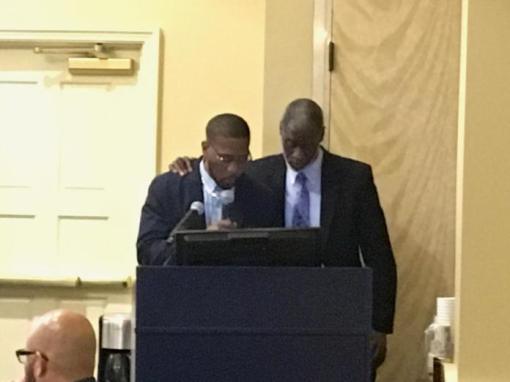 Alfred Chestnut (left) and Ransom Watkins, who spent time in prison for crimes they did not commit, speak at Exoneree Advocacy Day in Annapolis Wednesday. Photo by Bruce DePuyt

By Bruce DePuyt — A group of powerful lawmakers — including the speaker of the House — signaled on Wednesday that they are determined to establish a fair compensation system for people who serve time for crimes they didn’t commit.

Their statements of support come months after the state’s top leaders struggled publicly to come up with a way to compensate five men who served long prison terms after being wrongfully convicted.

Advocates for exonerees say the five cases surely won’t be the last, and they are pressuring the General Assembly to come up with a formula that can be used in the future — and to make improvements to the criminal justice system so that false convictions become less likely.

Speaker Adrienne A. Jones (D-Baltimore County) spoke at an “Innocence Advocacy Day” in Annapolis organized by the Mid-Atlantic Innocence Project. She then took a seat in the back row and listened as nearly a dozen men — mostly middle-aged, all but one African-American — told their stories.

Afterward, Jones told Maryland Matters there is “more awareness” about the devastating impacts false convictions have on those whose lives are derailed by such injustices.

“The momentum is there,” she said. “I think the timing is right to be able to get something done.”

Last year the Board of Public Works — made up of the governor, comptroller and treasurer — struggled to figure out how to compensate the five men, who spent a total of 120 years behind bars for crimes they didn’t commit.

After the issue bounced around for several weeks, the panel adopted a formula crafted by a top aide to Comptroller Peter V.R. Franchot (D) — the median annual state income for the last four years of a person’s incarceration multiplied by the number of years they were in prison.

Del. Kathleen Dumais (D-Montgomery), the vice-chairwoman of the House Economic Matters Committee, is sponsoring a bill that would enshrine a similar formula in state law, so the Board of Public Works doesn’t have to reinvent the wheel with every case.

“The governor claims he wants a process. We’re going to give him a process,” she told the men. “We’re going to create a process where somebody is going to make a decision and then all the Board of Public Works is going to have to do is sign the check.”

“I don’t know how to repay any of you for what you’ve been through,” Dumais added. “The only thing we can do is make sure we get this legislation through.”

Advocates are pursuing two bills this year — one to create a compensation formula for former inmates found to be innocent and another to track the system by which those accused or convicted of crimes can earn leniency by testifying against others.

“Sometimes the state will offer them incentives [to testify against others],” Smith said in an interview. “Right now we don’t track that. So you have situations in which people [testify] multiple times to get more incentives.”

‘I watched people get raped’

One by one, the men described the falsehoods — outright lies in many cases — that were told by trial witnesses testifying under oath.

They described the indignity of being judged guilty of crimes they hadn’t committed. And the horrors they endured during prison sentences that in many cases stretched for decades.

Ransom Watkins walked free in November after 36 years in prison. He was wrongfully convicted of murder in 1983 at the age of 16.

His voice cracking with emotion, he told his story.

“I watched people my age get raped in prison. And I watched police watch it happen. The only thing we had in prison was each other,” he said of his friends. “No one else cared.”

“But we knew the truth. And no one can change that,” he continued.

Watkins conceded his “lack of remorse” hurt his chances for parole; But his lack of guilt meant he had nothing to feel remorseful about — except his own circumstance.

“Our word meant nothing,” he said. “But we never gave up. We kept fighting. And we knew one thing. We knew the truth and we had each other.”

Men who spent decades behind bars described the difficulty they have faced in re-entering society after years in prison. In some cases they had little family, no belongings and no money.

In many cases loved ones died while they were in prison. And they had few skills to offer employers in a world they scarcely recognize. They struggle even to obtain a legal ID.

As the men spoke, several family members and staff dabbed their eyes with tissues.