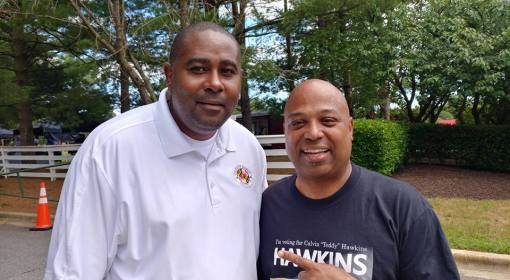 Democratic at-large council candidate Calvin Hawkins (right) and Delegate Mr. Darryl Barnes (left)  Mr. Hawkins is a well known sexual predator and robber who made the county to get sued in Federal court for his sexual misconduct. Mr. Hawkins is also involved in violating rights of other minorities in Prince George’s County. He needs to suspend his campaign and go home. The County residents must demand the withdraw of this candidate for a better future. On the other hand, Delegate Mr. Darryl Barnes activities are controlled by Delegate Dereck Davis, Calvin Hawkins and others to derail the agenda for the county. Both must go home by electing new leaders who mean well for the county.

Following our exposé about Sexual Predator and Convicted Robber Mr. Calvin Hawkins who is running for public office in PG County, a major plan has been organized to bribe key parents and leaders in Prince George’s county for the purposes of facilitating certain key facilities and organizations using unethical means to win fraudulently in 2018 election.

Among the key facilitators are Delegate Darryl Barnes and other delegates running for public office in PG County starting with the Chairman of the delegation Delegate Jay Walker and Delegate Dereck Davis (chairman of economic matters in Maryland).  According to people spoken to by Reform Sasscer Movement Secretariat,  there are plans to facilitate short underhanded methods to stay in power by key delegates involved in public corruption by calling shots from Annapolis. This comes after this blog exposed key players involved in the current fiasco in Prince George’s County.

Earlier this morning, delegate Barnes and others exposed in a wide ranging scheme decided to buy breakfast as part of the wider scheme to facilitated public campaign corruption in Maryland at TGI Friday’s in Forestville and to involve other organization.  Already one person who is familiar with the illegal plans has been threatened by persons associated with Delegate Barnes, Delegate Dereck Davis and Mr. Calvin Hawkins.

This morning breakfast at Forestville comes after Senator Antony Muse accused  Delegate Jay Walker of …..” not letting school board repeal bill out for a vote. This is wrong. This is politics at its worst. Yes all need to join in and put pressure on him from our district and County to return it to an all elected school board as my bill demands”, stated senator Muse.

HB 1107 law was supposed to be revealed this year but it is being blocked in a wide ranging scheme facilitated by key public officials in Maryland to maintain the status quo.   Read more >>Fiasco in the Maryland legislature<<<

In the meantime, Darrell Andre’ Miller whom we exposed in this blog a few months ago as being unfit to run for public office has withdrawn his candidature. This is good news for Prince George’s County and Maryland in general. We recommend Mr. Miller for soul searching and for doing the right thing.

There is no question these issues are so fraught, so weighted with unattended baggage that discussions about the legitimate concerns and frustrations of others and the double-standards and the limits on liberty faced by African Americans, and black males in particular, are never sustained, if not outright avoided.

Yes, we’ll move on from this, too. But we will be better people in a better place because of it.

Delegate Dereck Davis (chairman of economic matters in Maryland) is said to be the force behind the scenes to derail progress in PGCPS so that his wife can benefit from the fiasco and derailment for personal gain. Davis must go home from the Maryland legislature by electing new leaders to replace him. Dereck Davis is married to Deputy Superintendent Monique Davis