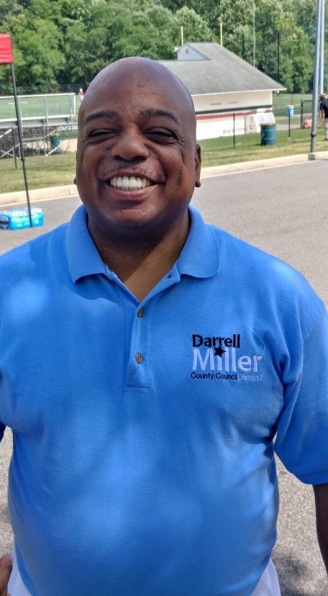 Upper Marlboro —Maryland delegate Darrl Barnes is in trouble for endorsing Mr. Darrell Miller (a former mayor accused of theft). Recently in an online posting which was brought to our attention,  delegate Darrl Barnes was asked to explain why he hired a thief as a Chief of Staff in Annapolis this past year and then subliminally endorsed him for  District 7 Council- Rep in next year’s election cycle for 2018.

In a facebook post, Mr. Ron Williams says that the delegate Darrl Barnes should explain and not fake like he didn’t know what he was talking about.  The Prince George’s County activist Citizen attached a post from wjla to proof his point.  Adding that, Delegate’s statement was no different than saying let’s keep the same corrupt individuals in office because they got faults but yet they never do anything for us?

In 2018, Maryland citizens needs to wake up and elect leaders with strong commitment to public service who have no ties to public corruption. Conflict of interest amongst political leaders and public officials, as we understand it today is a major problem in the county. There is a major need to reform the Maryland court system which is tied to other states.

With one of the highest incarceration rates in the world, the U.S. prison system is in desperate need of reform. Issues of overcrowding, the school-to-prison pipeline, and racial disparity in sentencing dominate headlines and point to serious underlying problems with American criminal justice. Though these institutional flaws are becoming widely recognized, and legislators across ideological lines are attempting to enact reforms many barriers to change remain especially in Prince George’s County.

In addressing these issues, the most decisive means of dismantling kleptocratic power structures is prosecution and adjudication of the crimes that empower them. In most if not all of these regimes, however, the legal system has been coopted or cowed by prevailing elites. When contemplating an international intervention into such regimes where obstructionist elites enjoy impunity, the international community has shackled itself with a false dichotomy between either completely replacing the local legal system. In this regard, there is no difference to what is happening in Prince George’s County and other parts of the world facing government corruption tied to these issues.

The county leadership and the citizenry can do better in the 2018 election cycle. Let us hope that, you will no longer vote for the people that only have yearly BBQs but for the people on the ground that are fighting issues, creating legislation, supporting your children, sending you resources, helping you when you have been victimized etc.  In the past and even now, there is a culture in Maryland of isolating people running for public office who speak truth to power.

There have been cases. Take for example the case of Denise M. Joseph – Education, Community and Youth Advocate who recently narrated her ordeal on how her campaign was sabotaged by the establishment.  Mrs. Denise M. Joseph stated in details on her facebook post what transpired during the election season, she wrote in part…….. “In fact, they banded around to not get me there. They told people to not vote for me, to not support me, to not put me on their ticket and they may have even went far enough and told my friends not to help me AND the people that were helping me, they asked them to sabotage my campaign.”

Denise M. Joseph concluded by directing her followers and others to run for public office by attaching Filing Requirements for Candidacy in 2018. BOE Member Raaheela Ahmed, District 5 went through similar fate and there was open hostility due to her background during the campaign. In Ms. Ahmed’s case, the will of the people prevailed and she is now a Board member. There are many cases all over the county of great candidates with commitment to public service who were pushed to the sidelines to such a great loss to the public.

Prince George’s County deserves better years ahead. The county citizenry has a responsibility to elect great leaders in 2018 irrespective of their racial backgrounds.

It’s time to drain the swamp and the sewer at once!

Prince George’s county Map highlighted in yellow color is a unique County with chances for success with proper accountability and transparency.