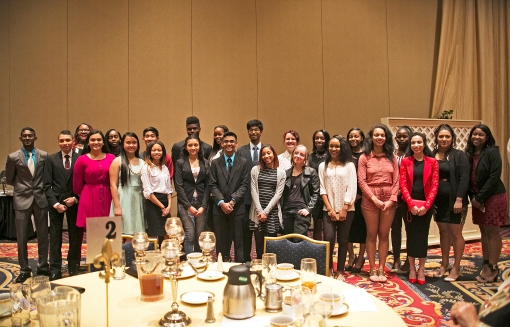 At the annual valedictorian and salutatorian celebration, Top of the Class, more than 50 students from all the high schools, vocational schools and evening schools were celebrated for their outstanding academic achievements and personal victories.

Two students who accomplished great achievements and personal victories were Marlen Cruz and Meybelin Alarcon, who are the salutatorians at the Academy of Health Sciences at Prince George’s Community College and Evening School at Crossland High School, respectively.

Cruz credits her strong work ethic and support of her family and school for helping her reach her goals. As a graduate of the academy, Cruz has earned both a high school diploma and an associate degree from the community college, where she held a 4.0.

“It was four years like any regular high school, but it was tedious. You’re taking college courses along with high school classes and you’re taking classes with other college students. Your educators are also college professors,” Cruz said.

She will study public health at the University of Maryland, wants to eventually work for the U.S. Department of Health and Human Services and possibly teach as a college professor.

At 21 years old, Alarcon has overcome great adversity in her high school career and said the honor of salutatorian is a great personal victory, a victory she dedicates to her two children.

“Being at this point and getting my high school diploma, it’s meant a lot to me because I’m a mother of two kids. My son is two years old and my daughter is five months and working, being a mom and a part-time student, it’s meant a lot. It’s worth it,” she said.

Alarcon dropped out of high school in Montgomery County two years ago and moved in with the father of her children, who later went to prison. But Alarcon refused to let anything get in the way of her earning her diploma.

“I thought I was going to quit because it was too much pressure. It was only me and my mom lived back in Montgomery County and I didn’t want to move over there. So, it was really hard,” she said. “I’m really proud. I never thought I would be in this position right now. I’m the first child of my mother’s to graduate.”

Among the accolades of the high achieving students honored Monday night are millions of dollars in scholarships, acceptances to Harvard, Stanford, the University of Maryland, Georgetown and even the University of Southern California.

Dave Zahren, host of The Science Bowl and master of ceremonies for the event, introduced each student to the room and bragged about each of their accomplishments made during their time with PGCPS.

“We’re celebrating the very best students in all of Prince George’s County,” Zahren said to the crowd. “You are the valedictorians and salutatorians. The biggest, the brightest, the baddest kids on campuses from Bladensburg to Surrattsville.”

Eubanks lauded the students for their work during the year and thanked and acknowledged the parents behind each student. He said he was amazed by the students and their accomplishments.

Eubanks said the school system, the county and the world expect a lot out of their leaders and high achievers. He said the world “is a mess” and he’s counting on the students to help sort it out.

Maxwell also had a request for the valedictorians and salutatorians of PGCPS. He said he saw many shining examples of great leaders who want to work in medicine and become doctors or explore artificial intelligence and become scientists, but said he wished more were pursing the field of education.

Maxwell said even if the students chose to not pursue education, they can give back to their community school systems.

He also had a final request of the graduates: to bring their knowledge back to Prince George’s County.