Dmitri Melhorn rolls up all the political spending by the teachers unions to make the case that they’re a big force in education politics. That’s undeniably true and over the past decade they’re among the very biggest spenders in federal races. Big Oil, Big Tobacco, Big Telecom, and Big Teacher. Their state spending and support for all manner of groups and organizations in and around the education sector is also a powerful leverage play. source Eduwonk

But there is an interesting disconnect here, in the two things are true at once sense.  Yes, the political largesse gives teacher union officials and lobbyists a great deal of access. A level of access most lobbies envy. Yet at the same time when the average teacher says they don’t feel heard by their elected officials you can see why they feel that way. Elected officials and their staff talk to teachers union representatives constantly, actual teachers much less often. And responding to the needs of one is not always the same as responding to the needs of the other.

More generally, our sense is that we’re seeing the high water mark of this kind of spending. This could certainly be wrong but three trends are ominous for the teachers unions in their current form over the longer term.

First, the courts may prove their undoing. While everyone is talking about Vergara , the California work rules case, the long term cases to watch are the ones concerning collection of dues in the public sector that are now winding their way through the federal courts. It seems likely that in the next few years the Supreme Court will decide that at a minimum collecting dues for political purposes must be an opt-in rather than opt-out activity. Some analysts think they will go further on public sector dues rules. A restrictive decision would be a political game-changer in terms of funding.

Second, the sector’s demographics are simply not in the unions’ favor. What Vergara really showed, regardless of what happens on appeal with the legal issue underpinning the case, was just how archaic the work-rules in education are and the disconnect between those rules and norms and the more dynamic and performance-oriented parts of the American economy – especially in the professional services sector. To be brutally blunt about it, people going into teaching increasingly don’t want to be treated like DMV clerks. Fix that problem and the unions either evolve to genuine professional organizations or they go away. Don’t fix that and prepare for the decline of public schools as a broad-based American institution and in increase in various kinds of non-unionized schooling options. Either way, the widespread industrial-era approach to organziing and managing schools is done except for the politics.

Third, politics are not running in their favor over the long haul either. Who knows what will happen in this year’s statehouse races, it’s a tough year to be on the ballot in either party. Yet governors who have taken on the teachers unions, most notably Scott Walker in Wisconsin, have survived efforts to punish them. Most immediately, what Walker did has dramatically changed the public employee landscape in Wisconsin. In terms of the politics Walker’s political base is the conservative exurban counties, yes, but the exit polling from the effort to recall him showed that even private sector union households were split on their position on his recall – which failed. In this year’s Rhode Island Democratic primary for Governor pension-reformer Gina Riamando beat back an onslaught from the teachers union – again in a primary.

Polling consistently shows (as does even a casual look at the nation’s editorial pages) that the teachers unions have a brand problem. Over time the political relationship between hard hat private sector labor and the public employee unions is an untenable one. If Republicans (and Democrats) truly wanted to marginalize the teachers unions they’d be moving heaven and earth to help private sector labor get back on its feet and become a force again. Don’t hold your breath for that though.

More generally, a subtle indication of the political problem occurred earlier this week. Marshall Tuck, running for state ed chief in California released a funny campaign ad with a bunch of celebrities. His opponent, the incumbent Tom Torlakson, responded with a video with the state teachers union head. That’s what they call a market signal. Related, something Melhorn didn’t get into is just how much of the positive visibility the teachers unions enjoy within elite media is pay-to-play rather than earned.  The lack of earned goodwill, too, is a market signal.

There was a sense in the late part of the last decade that there was a chance for a shift toward a different kind of teacher unionism, we saw the opportunity as did others – that hasn’t happened. And the price for it will be real. That’s why these spending numbers are interesting as a window into current politics but ultimately seem more likely to be interesting as a high water marker of an era that’s heading toward its end. There is no doubt that, union officials needs to be more accountable to union members to deter fraud and embezzlement.

Teachers and other Workers need information to hold their unions accountable, because union corruption remains a serious problem. The vast majority of union officers obey the law. However, a minority of union officers do misuse their position for personal gain. Since 2001, the Office of Labor Management Standards has indicted 1,004 union officials for crimes such as fraud and embezzlement of members’ dues. It has won 929 convictions and $93 million in court-ordered restitution to union members.

Union financial transparency protects union members from corrupt officers. It also protects the integrity of the union movement itself. Organized Labor cannot effectively advocate the interests of workers if its leaders are widely viewed as corrupt and self-dealing. CEOs order regular audits not because they have embezzled money from their firms but to show the world they have nothing to hide. Organized Labor should similarly welcome greater financial transparency that removes corrupt officers like Tyrone Freeman to show their commitment to protecting the interests of their members.

In Maryland and around the world, Union members whether in teacher’s union or SEIU, ASASP, ACE-AFSCME Local 2250 etc. needs to keep on demanding answers from their Union leaders to create accountability and transparency mechanism. Otherwise, the loss is ours in the end. This is the only way to keep the American dream alive and keep the promise of a better tomorrow a reality! 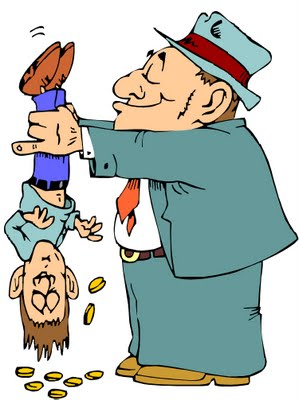 The little man v. the Big labor and the mismanagement of union dues for political agglomeration.